Paul Bocuse is a local hero here and it’s all due to food.   He is the man that started the nouvelle cuisine movement which incorporated fresher ingredients in traditional French cooking.  He is famous for having achieved record 3 star Michelin ratings for his restaurants.  For those not familiar with Michelin ratings, they are issued to restaurants based upon the quality of offerings, and range from no star to three stars.  And yes, it was started by the two French brothers who owned the tire company.  The Michelin Guide began in 1900 and was developed to help motorists find good places to eat and good mechanics.  Mechanics are however no longer rated, which is a darn shame since it would make car service appointments so much more interesting.  Although it’s been around for a long time, the U.S. only began to receive ratings in 2005.  The top-rated restaurants are described as being “worth a special journey,” which sounds pretty understated considering that there are, for example, only a dozen or so of these in the U.S.  Of note is the fact that service quality does not affect the star earned; that part is separately rated along with the ambience by the amount of forks and spoons assigned. To most of us simple folk, having good service is a huge part of our liking of a restaurant or not, so  you can imagine, the stars alone are not the full story.

Michelin stars are nonetheless a big deal, and Bocuse was one of the top collectors of three star ratings until his retirement.  Bocuse passed away in early 2018  but his legacy lives on and it’s something Lyon continues to be proud of. As I finished this article, we were all saddened to hear about the passing of another famous chef, Anthony Bourdain, coincidentally in France for shooting his television series. I had first seen Bocuse in an interview conducted by Bourdain a number of years ago. Both of them contributed mightily to our food culture in different ways and will be missed.

We were able to visit two museums in Lyon and both were interesting and ones I would recommend.  The first museum we visited was The Museum of Confluences located at the meeting or confluence of the Rhône and the Saône rivers.   It’s hard to get a really clear description of what the museum is supposed to cover, but the best way I could describe it is as anthropology meeting science.  The museum had a permanent collection covering the origins of the universe, the age of dinosaurs, the evolution of man’s inventions, burial customs and how these developments intersect, playing off the confluence theme. As you can imagine, it’s a bit confusing but seems to work.  Above all, the museum is a spectacular building and well worth a visit.

The second museum was the Musée Miniature et Cinéma. This museum includes a large display of miniature rooms that are spectacular. Although they look like they would be used in filming movies, they are in fact simply works of art. This museum is located in a a restored Maison des Advocats, which is a UNESCO world heritage site. 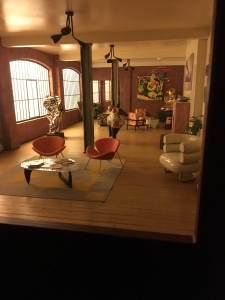 The miniatures are generally 1/12 scale, but honestly seem smaller than that. In addition, the first few floors of the building include famous movie props such as the Back to the Future Hover–board and the prop used to show the ill triceratops in Jurassic Park. We spent a long time in this museum, much more than we would initially expected. This museum is truly something that you’ll see not see elsewhere. 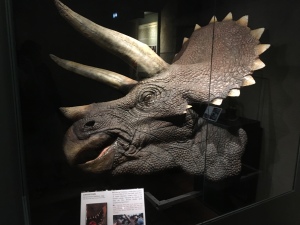 View all posts by mfschini