Over the years we’ve developed the habit of including one of those hop-on, hop-off buses in our plans for any city that we visit. Yes, they are very touristy, but you can really get a sense of what you do want to explore. It’s much better than leafing through a guidebook that is filled with useless coupons and which details the places every tourist should go, but you may not want to because every one else has the same book.

We took the Lyon bus tour yesterday and it was actually pretty good. Lyon does not have the number of attractions that Paris does, but there are certainly things to see. Above all, it is just a very pretty city. There were of course some technical problems and we had to change buses since the audio did not work. It was interesting to get a sense of the rivalry between Lyon and Paris since there were some comments made on the tour and by locals to us about how much better Lyon is than Paris. There’s likely a story behind that I am sure.

Another fascinating point in Lyon is the confluence of the Rhône and the Saône rivers. Most of us knew the Rhône but being able to remember the Saône was like trying to conjure up the name of that fourth member of The Three Stooges. There’s a museum at the confluence of the two rivers named, not surprisingly, The Confluence Museum. We’re planning on visiting it today and I’ll let you know what’s there– even the guidebook was a bit vague about what’s on display so we’ll see. 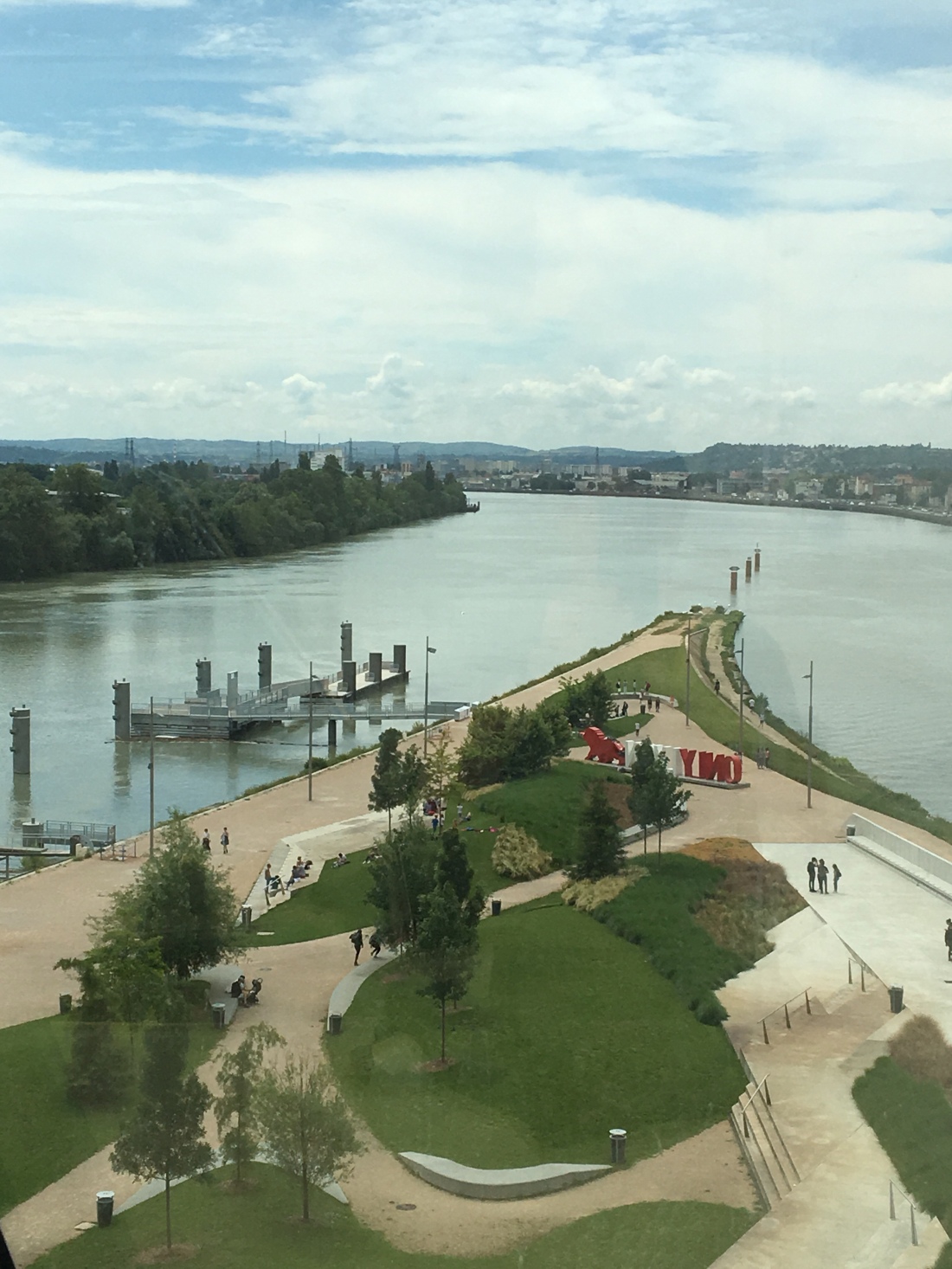 We’ve been pretty spoiled here by the wealth of good eating. There are so many choices, with a mix of local venues and also the standard Italian, Thai and Middle Eastern haunts. It’s refreshing that restaurants here provide portions that you can really eat versus the massive sizes that we see in the U.S. In spite of this France recently passed a law that requires restaurants to provide a doggie bag container if requested by the customer. Such a container is called “Le Doggie Bag” in French representing one of the new English expressions brought into French. Given the less than sterling reputation that American food has here, choosing to use our word will not help assist in changing that. As you can imagine, of course we wanted to try out this new thing and asked for, and received, a box for our leftover pizza in an Italian restaurant.

“Menus,” which include pre-selected courses, are popular here and found in most every restaurant. Wine and beer are common to see at both lunch and dinner. The wine choices are excellent and varied, but basically varied only to the extent of which French region. Speaking of wine, one of the interesting facts we heard on our tour is that Beaujolais is not as popular here as it seems to be outside of France, making me wonder if we have once again fallen for a massive marketing gimmick such as the ones that brought us fondue, St. Patrick’s Day and Cinco de Mayo. Beer choices seem to be Belgium based, with Heineken appearing on some menus as well. Extreme caution should be taken with some of the Belgian beers since they include some essentially weird choices such as blueberry- ugh!

One of the more visible ways this country has embraced change is through the sharing economy. My son Wes landed here for law school last week. He’s rented part of an apartment through Air B&B, takes Uber to go from place to place and has made good use of Uber Eats. We’ve seen Uber Eats bicyclists throughout the city and also around through Uber. None of this would have been possible five years ago. In addition, Lyon introduced the first major city bike sharing program and we’ve seen their iconic red bikes all over. I should mention that of course the city made a point of noting that their program was in place before the program in Paris. All of these changes make doing things so much easier for everyone, despite the disruption they’ve caused for many existing businesses. And they especially make it easier to visit- for example, when we take Uber, there are no communication difficulties about where we’re going!

View all posts by mfschini